Fall colors and bird netting on vines means grapes are ready to be picked.

Grapes were selected for Johnston Vineyards based on the quality of wine they can potentially produce and their ability to withstand the short summers (limits ripening) and harsh winters (although climate change has diminished the severity). Vinifera grapes are those that traditionally were grown in Europe. They tend to be more sensitive to cold and disease. They include Chardonnay, Riesling (white wine) and Pinot Noir (red wine), all of which are now being grown successfully in Nova Scotia. However, one exceptionally cold winter could wipe them out and that is the risk the vineyard owner takes when growing these grapes. The tradeoff is that these grapes produce better wines and attract higher prices. Very good wines are now being produced from cold hardy hybrid grapes like L’Acadie, New York Muscat and Geisenheim 318, all white wines, and Marechal Foch and Lucie Kuhlmann (red wines). These grape vines are derived from crosses between Native American vines and the vinifera vines from Europe and tolerate cold and disease better. Newly developed hybrids like Marquette and Petit Pearl are producing remarkably good quality wines although lack the tannins and fullness found in warmer climate wines. Nova Scotia grapes are particularly good for sparkling (Champagne style) wines. They provide the right balance between acid (high) and sugar (low) needed to produce this kind of wine. 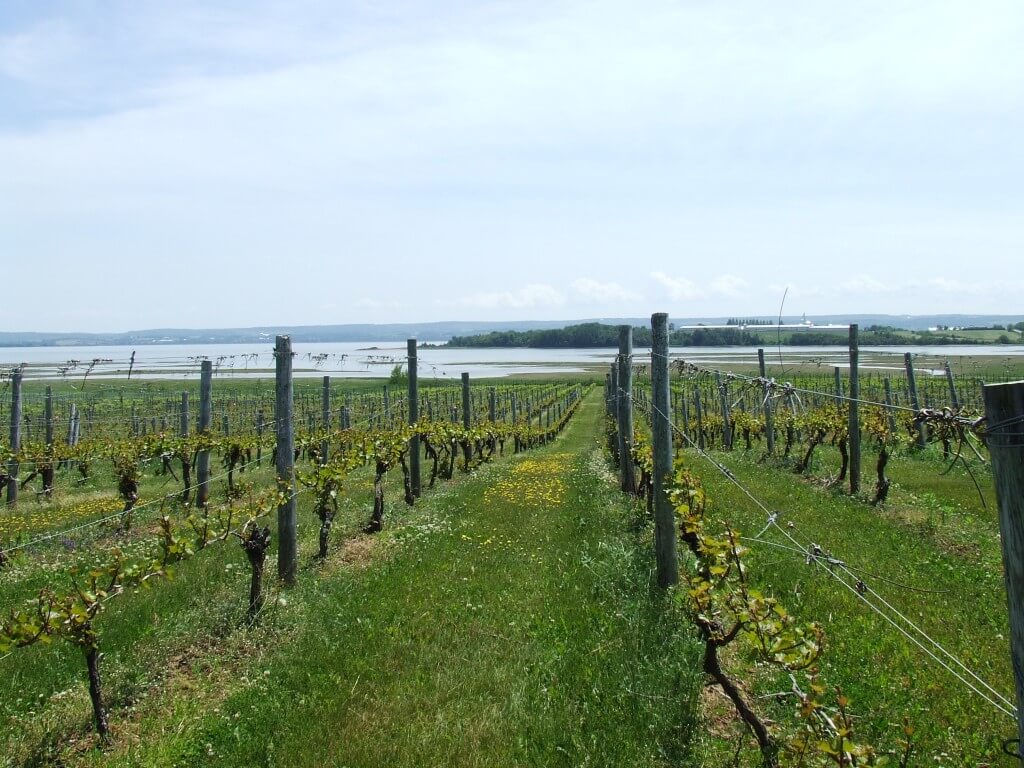 Chardonnay is a vinifera (European grape) which has many clones and rootstock. Two clones were selected that have shown potential in Nova Scotia at Lightfoot & Wolfville vineyard. Late ripening requires a long warm fall. Early cluster thinning will improve ripening. Grapes that don’t fully ripen are excellent for production of sparkling wines. Winter kill due to cold is a problem as is crown gall aggravated by winter cold injury. Riesling is a vinifera and is hardier than Chardonnay but is also late ripening. Unripe grapes are excellent for sparkling wines. It is particularly “terroir expressive”. Vidal is a cold hardy (well, not that cold hardy) hybrid plant (American/European cross) that produces lemony flavors with vibrant acidity. It is usually blended or used to make icewine. New York Muscat is a cold hardy hybrid vine that produces a highly aromatic white wine that is very popular in Nova Scotia. Yield may be low, but it is winter hardy. Petit Pearl is a new cold hardy, hybrid red grape developed in Minnesota by the grape breeder Tom Plocher and released in 2010. None is currently grown in Nova Scotia. It is similar to Marquette with good yields but the tannins are softer suggesting it will become the cold climate equivalent of Merlot. Marquette is a cold hardy, hybrid red grape developed at the University of Minnesota. It is the cold climate equivalent of cabernet. Aged in oak, the acids are reduced making it the best cold climate red to date. It is the predominant red wine made in Minnesota.

Cabernet Foch is a cross between Cabernet Sauvignon and Marechal Foch. It is just beginning to be grown in Nova Scotia and is considered cold hardy. Luckett’s Black Cab wine, a highly acclaimed red wine contains Cabernet Foch. Grand Pre Winery described it’s 2009 Cabernet Foch as a “deeply coloured red wine with fresh berry aroma that suggests strawberries, raspberries and blackberries with hints of green pepper and cherry. Soft tannins add structure to the plump fruitiness for a full, round flavour and a long finish”. Yields are low and the vines are highly susceptible to crown gall likely aggravated by cold winters, wet roots and disease. Specialized pruning methods may need to be used along with more intensive vine care. It is thought to have considerable promise by Nova Scotia winemakers.